We start the year with a favourite cartoon of Angela Merkel being dragged over the cliff edge by the Greens and Germany’s mad renewable energy policy called Energiewende. It looks like she might survive this year having said she will go in 2021.

On the left and from the top we have a Jeremy Corbyn, leader of the UK Labour party, spoof of his slogan ‘For the Many, Not the Few’. Then we have Michael Moore, a US film director and activist, who seems to have Trump Derangement Syndrome, poor guy. And finally ‘Two Movies on one screen’, and a hat tip to Scott Adams who coined the term and writes about it here.

Roger Harrabin says that 2017 was a record year, except it wasn’t. A View From the Trenches – Michael Mann said that the climate change debate is like being in the trenches – but I doubt they would be there if it wasn’t for the money. Al Gore says freezing weather is what we should expect from Global Warming because….science! And David Attenborough makes us all think about plastic in the oceans. Quite right too.

Very sad story about sexual exploitation by Oxfam charity field workers. Elon Musk sends a Tesla car into space. Great marketing but I am fairly sure Sir David would not approve of adding to the junk in space, don’t you? The new all women Labour shortlist. I thought I would be in trouble from the PC police for this cartoon but I don’t think anyone noticed. Finally a report that shampoo and cleaning products are as harmful as vehicle fumes which you can read  here. I wonder if London will have a low coiffured zone anytime soon.

Scientists suggest that you are more disgusted by bad smells if you are ‘authoritarian’ which they link to the Right wing in politics. So if you are left wing, presumably having B.O. is fine. In the US, Muller indicts 13 Russian nationals for posting ineffective ads on Facebook. In March this year Muller’s report was finally released and concluded that there was no collusion by President Trump. George Monbiot mansplains to a reader that freezing weather if Global warming – something of a meme being regularly repeated by alarmists. Anyone might think they were worried about Global Cooling. And lastly Groupthink. A brilliant report by the legendary Christopher Booker inspired this cartoon –  alarmists tend to stay on message and seem to be proud about their lack of diversity.

The Six Americas framework is a spoof on this cartoon by Michael Sloan. More fibbing about cold weather from the Met Office who predicted milder-than-usual weather. Kate Hayhoe is a famous ‘climate communicator’ who blocks tens of thousands of people on twitter and asks us not to look at the past when it comes to climate change. Lastly a distinct shift has happened in politics – the Left used to represent the people but now it represents the elites, whereas the Right used to mean establishment but it now often means ‘populism’.

Top left, StrawMann: a cartoon for all those times climate activists get the wrong end of the schtick. Jeremy Corbyn looks very sinister on BBC’s Newsnight and Owen Jones Takes the rap. Bottom right are spoof climate emojis, you can read about the ‘real’ ones here .

More Corbyn-evil-mastermind while someone was prosecuted for teaching a pug to raise its paw. There was a paper on polar bears that Judith Curry called the stupidest paper ever – you can read about it here. And we buy Russian gas why?

The second polar bear cartoon on the stupidest paper ever. Above that there was a story about our recycling being shipped to Asia and then getting dumped into the ocean. Seems a trifle mad. More Corbyn – he is fun to draw – and the very best Mann made temperature stations which recently have been pumping out fake records – read about this one in Germany.

A mock-up of the A3 size Calendar. 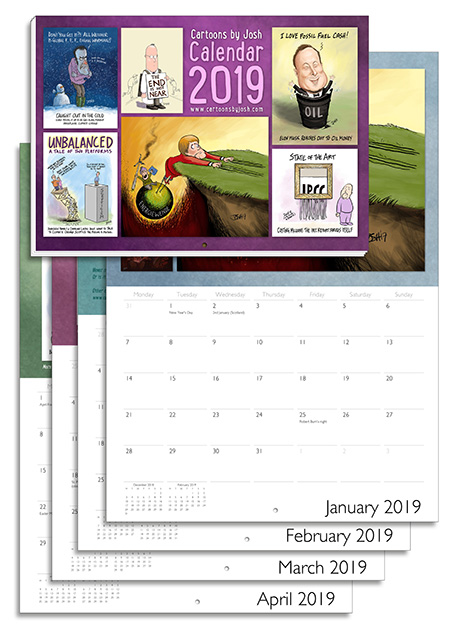 Note: Most links are on Bishophill/Josh.